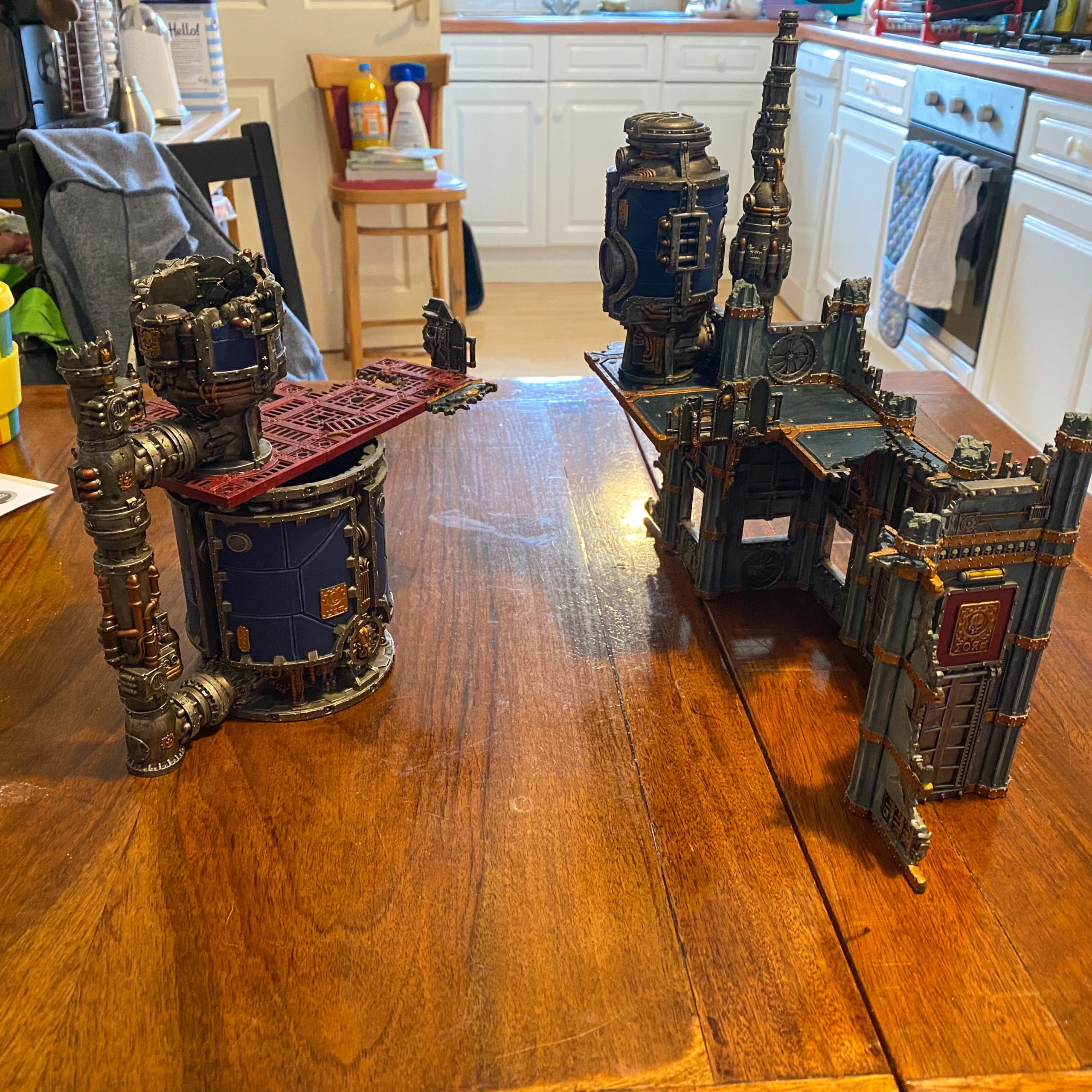 For this months article we take a look at the box containing my Sector Imperialis and Sector Sanctoris Killzones.

These were done using the guide done by Peachy when the Sector Imperials terrain originally came out.

So that’s primed with Mechanicus Standard Grey, drybrushed with Celestra Grey then a lighter drybrush with Ulthuan Grey.

The ruins here allow Kill Team boards to be set up in anyway the missions from both the core book and the Sector Sanctoris sets require.

And I do love this stuff, it’s nice and chunky and really adds to the battlefield.

The next piece is the Derelict Factorum which is a nice huge piece of terrain that I usually put in the middle of the table.

This building was a really fun piece to paint, but it took a bit of time to figure out what I wanted to do with it.

The icons above the doors are painting as being on red plates to tie in that the Mechanicum would be in charge of this facility.

The normal flooring is painted in Stegadon Scale Green, then washed with Nuln Oil and then drybrushed with Thunderhawk Blue.

The mechanicum flooring is Khorne Red, washed with Agrax Earthshade and drybrushed with Wazdakka Red.

I built it so that it splits into two sections, this way it can be easily stored away when not in use, if it were in one piece it would be a difficult one to store away.

The next two pieces are the big buildings from Kill Team, the Cloister being the first one which is nice and big and really can dominate a section of a table.

The top floor walls come off if needed which also makes storage a lot easier.

Although I have a fondness for the Cities of Death terrain I have to admit this stuff does allow you to fit more models on higher floors.

The smaller Kill Team building also has the top floor detachable to allow for easier storage and for those walls to be used as another piece of ruins.

The next pieces are the Quake Cannon craters that Games Workshop releases a few years ago.

I managed to pick up two sets of these when they were released and if I am honest I am a touch disappointed that they went out of print.

They make amazing additions to any table, the other set are contained in another box, but these are in here to add scatter terrain to this table.

It was a lot of fun painting these and I absolutely love the details of them, especially the pieces of Chimera on two of the pieces.

There are two sets of Sector Sanctoris Ruibs in this set, I have said before that these runs are wonderful as they add a lot of flavour to a table.

One set of these cane with Killzone Sector Sanctoris, the other set came with Urban Conquest.

I have said before that I really love these, they just add so much flavour to a table and really give a sense of realism with fallen statues and crumbling ruins and my personal favourite, the sewer grate.

The statues are nice and big and imposing, one pair of these came from the Sector Sanctoris Ruins and the other were kindly donated by Mark Frost of Frost Fiend Studios.

I love these statues are they are so amazingly detailed and look amazing on the table.

These were primed in Retributor Armour, washed with Reikland Fleshshade and then drybrushed with Necron Compound. It’s simple but I think it gives a nice result.

The last items in this box are a set of Imperial Objectives, which originally came with Urban Conquest.

They just add a few little bits of scatter terrain to the table and when players are using this set of terrain they can use these as objectives if they want to.

I like this table because whilst it doesn’t have a large number of buildings, there are three reasonably big pieces that when combined with everything else offer a challenging table.

So how would I want to improve this table, well if I am honest, I would like to add another box of Sector Imperialis Ruins, just to add density to the ruins, and probably an Honoured Imperium and if there is room a Battle Sanctum.