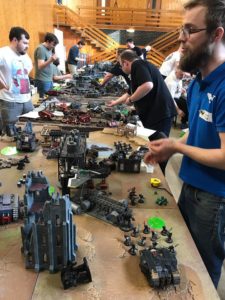 Players will be split into two teams, Loyalists and Traitors. Players with Solar Auxilia, Imperial Milita, Questoris Knights, Mechanicum and Blackshields armies will be split to balance sides if needed.  Players of these forces should specify a preference and we will try to accommodate them.

Team captains will be appointed and they will be given special missions and characters to issue to their teams to help create a narrative environment.

For the first game, pairings will be engineered and a scenario developed specifically for that match up; these will be narrative based within the theatre of war.

After this, Swiss pairings will be provided to team captains.  The team which is at that point behind in terms of points will then be able to swap players round in order to optimise their strategies.

Players will only play each of their opponents once over the weekend.  In the case of armies being paired together a second time, they will be swapped with a minimum amount of inconvenience to the players.

There will be a total of five games played over the weekend.

The latest FAQ and Errata will be used. Only officially released answers will be used – emails from F 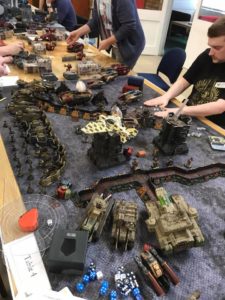 orge World will not count. The first approach should be for the players at the table to look up the issue in the rule books and Errata.

If the issue is still unclear then please ask one of the event team; they may not provide the answer you like but it will be the one you will have to use.  These answers will be a most logical approach unless there is no obvious answer, where a dice roll shall decide.

Every player at Company of Legends is expected to maintain a good level of sporting behaviour, but to recognise those players who go above and beyond, you will be asked to vote on their top two best sporting opponents in order. These votes will be tallied with 3 points hoping to the 1st player and 1 point to the 2nd. Whoever scores highest will win the Paragon award.