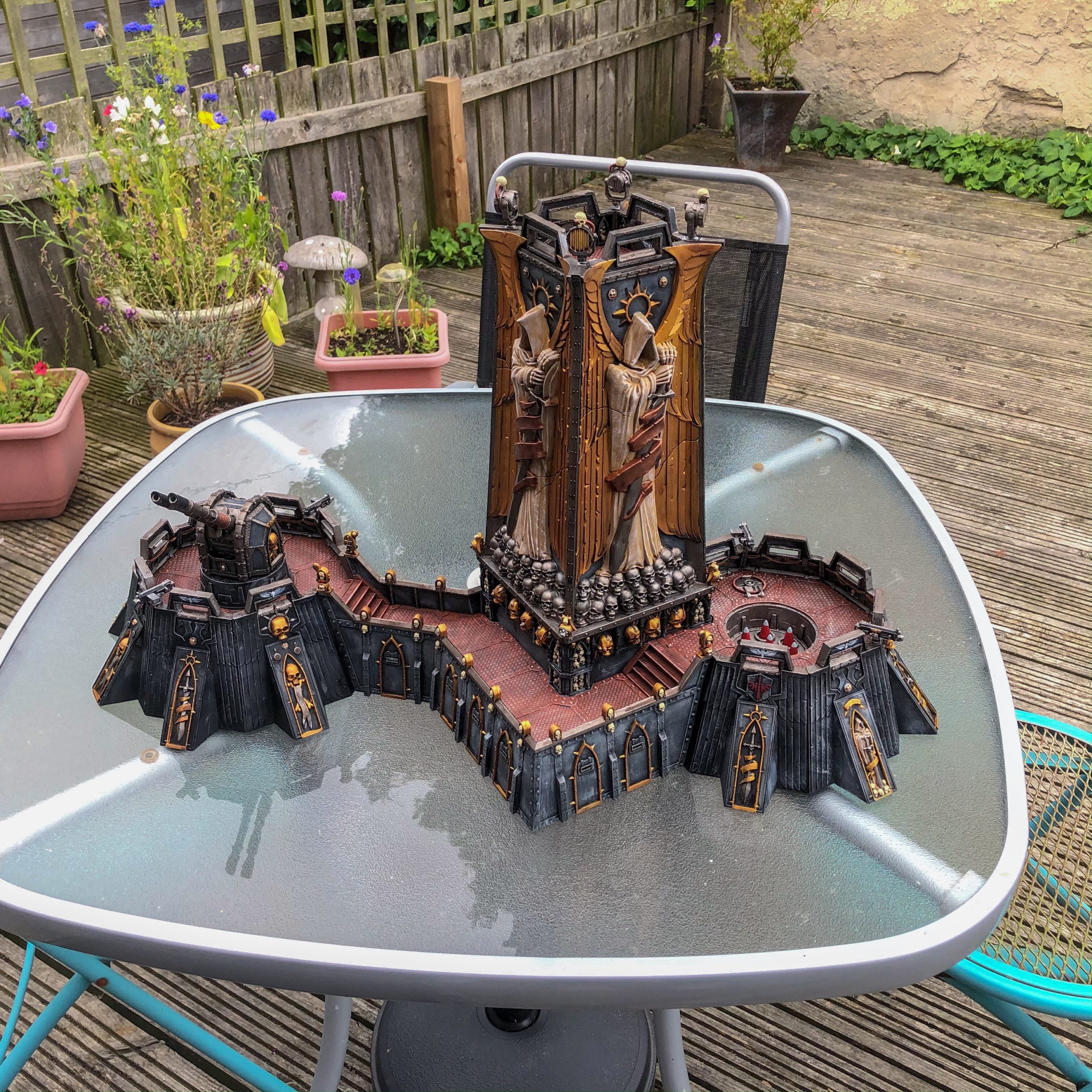 For the first Board Stories article that focuses on a table I wanted to look at what I feel the Imperial Strongpoint.

It’s based on a box of terrain that Games Workshop offered a while back called the same, and contained two Bastions and three Aegis Defence Lines, so I set out to recreate this as the core of this board.

The first two parts of this table are the two Bastions, built out of the box as is these were painted a long time ago and like everything in this board use the same scheme for their rockcrete, primed black, then drybrushed Stormvermin Fur, followed by Administratium Grey.

These a good because they form two solid big line of sight blocking pieces, and also are a great platform for squad to go on top and fire weapons from.

The next piece is some little bits of scatter terrain, the Battlefield Accessories Set, which I got with Warhammer 40,000 Conquest, it’s not much and the sprues are very old, but they are nice little bits to put on the table.

The Aegis Defence Lines form a big part of this table, creating cover for infantry and blocks for vehicles.

I only have two of these, but I actually want to eventually add a third set to allow me to create a large network of them, Graham would be proud!

These two pieces are the first bits of terrain I made when I got back into the hobby, they are paper mache craters on CDs, I know I can do better now, but I just can’t bring myself to get rid of them.

Sometimes I think about making more of them, but I wonder if they look a tad unprofessional.

These Thermic Plasma Regulators were my first pieces of Sector Mechanicus scenery, and I still rather like them.

I paint my plasma green, I know blue is more traditional but I think green stands out better. These combine up with the following piece to form another little network.

There are two sets of Thermic Plasma Conduits here which again make a nice little network of infantry cover and vehicle limiting pieces.

I wish the kit came with a couple more feet though, there really aren’t enough to build them in a way I would really like to, hence a few cheats to make the feet go further like attaching bits coming out of the ground and control panels.

These are some very old pieces that I managed to pick up at a bring and buy sale in Gateshead, and they are pretty good, I kinda wish they were in a harder plastic, but I guess when they were made there wasn’t the market for harder plastic ones.

But they do a good job at creating some difficult terrain for things to move across.

The final piece is a Fortress of Redemption, ok so it’s traditionally a 40k piece, but the way I see it, the Dark Angels probably built these during the Great Crusade.

I like this piece because it’s a nice big thing that takes up a lot of board space and truly dominates the table, it’s forces vehicles to have to travel around and the tower block line of sight for most things.

So what would the future be for this board, well, the only thing I really want to add to it, is another set of Aegis Defence lines, after that I don’t really think it will need anything else.

Anyway, what do you guys think?