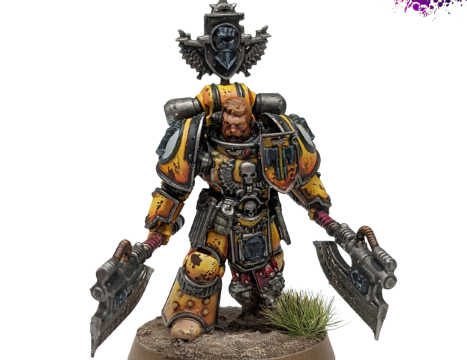 Isn’t this exciting, we have new plastic Horus Heresy characters!!!

Well three out of four members of the show bought this character. Rob will be potentially making him Wolfy, Chris is adding him to his Imperial Fists, and Michael is considering building a Fists army.

Look I am not gonna go into details on his rules, because I have no bloody clue how to really talk about them in a way that makes sense!

But he does look amazing and I am sure he will find a place in many VIIth Legion armies!

I got mine in an order from Element Games, and that leads me onto the fist thing, price, its really really good! We expected £23.50, but he came in at £18, meaning at Element Games he is £15.30 which is a bargain for a plastic character!

The box uses the new Warhammer: The Horus Heresy logo we saw unveiled at the Las Vegas Open a few weeks ago, its certainly similar to normal Citadel model boxes, but looks very distinct to 40k boxes.

Inside the box you get the single sprue for the character, a 32mm base, instructions and no plastic tray, which is great, because I think we can all agree we need less plastic packaging!

The sprue is a bit bigger than most character sprues, I think not having the plastic insert has allowed them to put him all on a single sprue, as opposed to some 40k and AoS characters who have to be put on two smaller sprues.

Interestingly the instructions have no rules, now make of that what you will, but its very different from everything else that Games Workshop make!

He is actually not too complex to build, and is pretty much like most plastic characters Citadel have made for a few years now, lots of fiddly parts which make an amazing model.

On thing I did find a chew one, and its something other hobbyists have said as well, but the cable connecting his head to the backpack is very very hard to get right!

None of us have had a chance to paint him yet, but our good friend Jessica Smart was lucky enough to get him early, and you can see how she painted him below!

We asked here how she painted him, and this is what she told us.

I actually started by priming it in Wraithbone, then doing contrast Iyanden Yellow over the whole model.

I cleaned up the armour panels with some Averland Sunset and then glazed some orange and reds onto each panel to give a more interesting colour.

All the metallic areas were then painted first with Black Templar before getting some Leadbelcher over the top.

And Warhammer TV also put out their own video on how to paint him.

My aim is to try and get him painted up this week, probably using the GW guide, but I have a few other ideas as well.

Let us know how you are finding this amazing model.