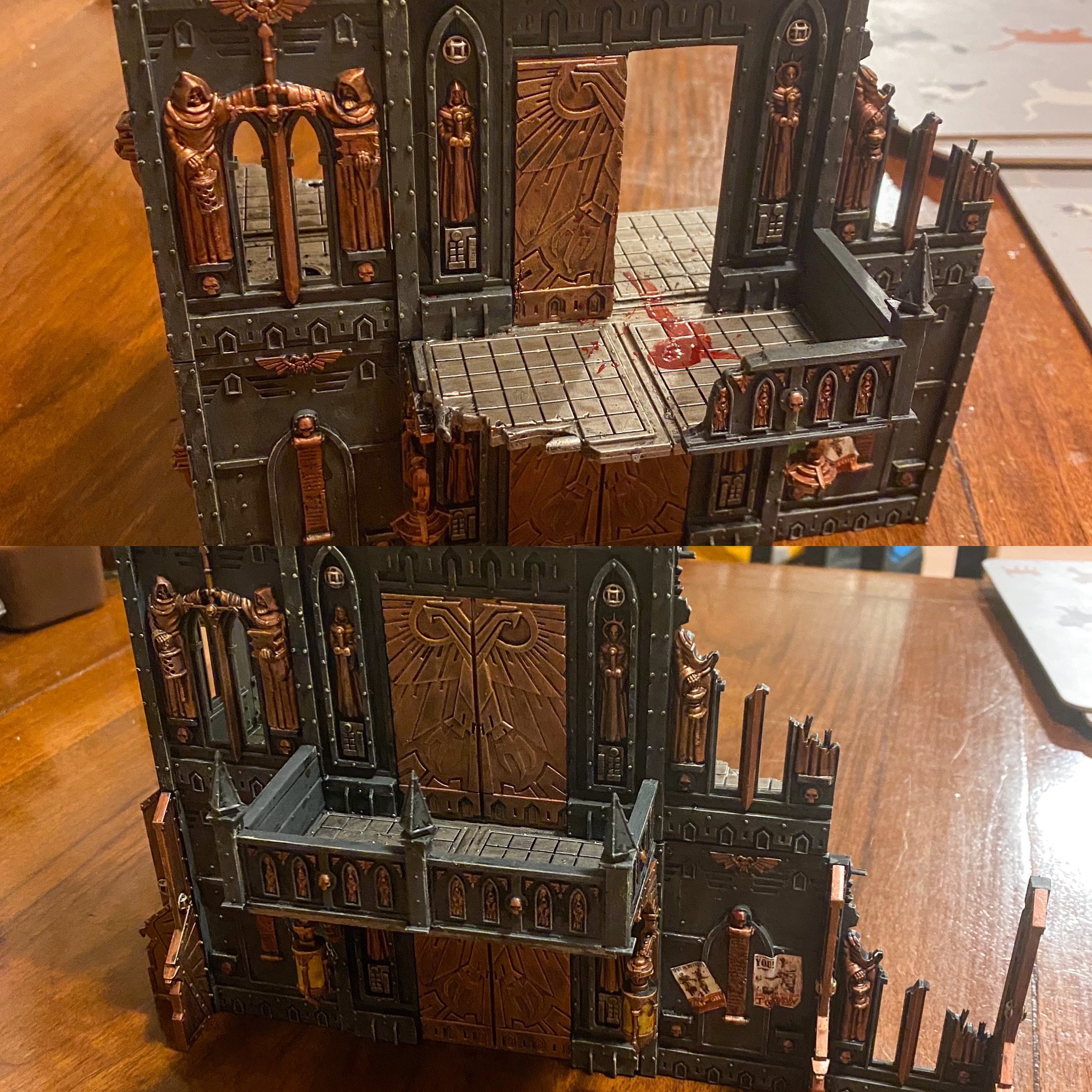 This is the latest board we added to the podcasts collection and it’s made up of building and ruins from three different generations of Citadel scenery.

First up are some Gothic Ruins, these were like a lot of this board, donated to the collection by Chris, and these go back to 3rd edition 40k I think.

The scheme for this board was to prime black, then paint with Skavenblight Dinge and then drybrush with Ushabti Bone.

This board saw me do a bit of weathering and adding a few little extras that I have never done before, as you can see from these, a key part of that was adding posters, which were downloaded from The Regimental Standard.

Again these were done in the same colour scheme and weathered with posters and the working parts of these, so the extractor fans etc were made to be grimy and rusty to look as if they had taken some abuse in their usage down the years.

Next game two parts of the Honoured Imperium set, these came from Chris, and the middle part of the Aquila and the ruin piece were both missing, but that’s cool, I simply filled in the missing piece with texture paint and painted it to match the dirt.

The assumption is that some chaos cultists have defiled the Aquila and taken the metal to be used in some dammed ritual.

The gold for these was painted with Balthasar Gold, washed with Agrax Earthshade and then drybrushed with Sigmarite.

The next pieces were some Secror Sanctoris Ruins, which I got from one of the Kill Teams packs that was released with Elites last year.

I like these ruins a lot and really wish they would release these separately, they are a lot of fun to paint and add some very characterful scatter to a table.

The next piece was a Basicillia Administratium from the Cities of Death range, which were the main scenery range from Games Workshop for a long time.

This piece was donated by Chris and required a bit of work to make it more presentable, I added some parapets to it so models didn’t look so weird on top.

This model had a lot of skulls, which were painted by basing them with Morgast Bone and then using Skeleton Horde Contrast over the top.

Here is a Manufactorum, again from Chris and this one needed quite a bit of work to make it look the part, again I added the parapet, and on the side I added a balcony type arrangement, because I didn’t have a wall where the floor extended to.

I really loved this kit, and although I understand why they don’t make it anymore, I still think it’s one of the best looking scenery kits GW have made.

This got weathered up like every other piece and again the hard working machinery parts were rusted up.

Then I finished the two big buildings from the Kill Team Starter Set, painted up like everything else, except for these I did the floor using Contrast Paint. I based them with Grey Seer, then painted two coats of Aggaros Dunes Contrast, then drybrushed it with Screaming Skull.

This gave me a sort of uneven imperfect stone like finish I was looking for and I am very happy with this.

These buildings combine with two of the Sector Imperialis Ruins to give them a wall on the first floor.

The one from Chris needed work, so a parapet was added and I also added the balcony which had to be left ruined due to the bits I had to hand.

With the Cities of Death buildings, the floors were done in Irons Hands Steel, and then washed with Agrax Earthshade, so they had a shiny fancy metal aspect to them, but left dirty because of the battles.

A bit of weathering done on almost all these pieces but not mentioned until now is the blood splatter, this is achieved by using Blood for the Blood God, watered down a tad and then flicked at the building to create splatter.

In some areas I stabbed it onto the floor or wall to create textured patches of blood and dragged the brush down or across to create blood trails.