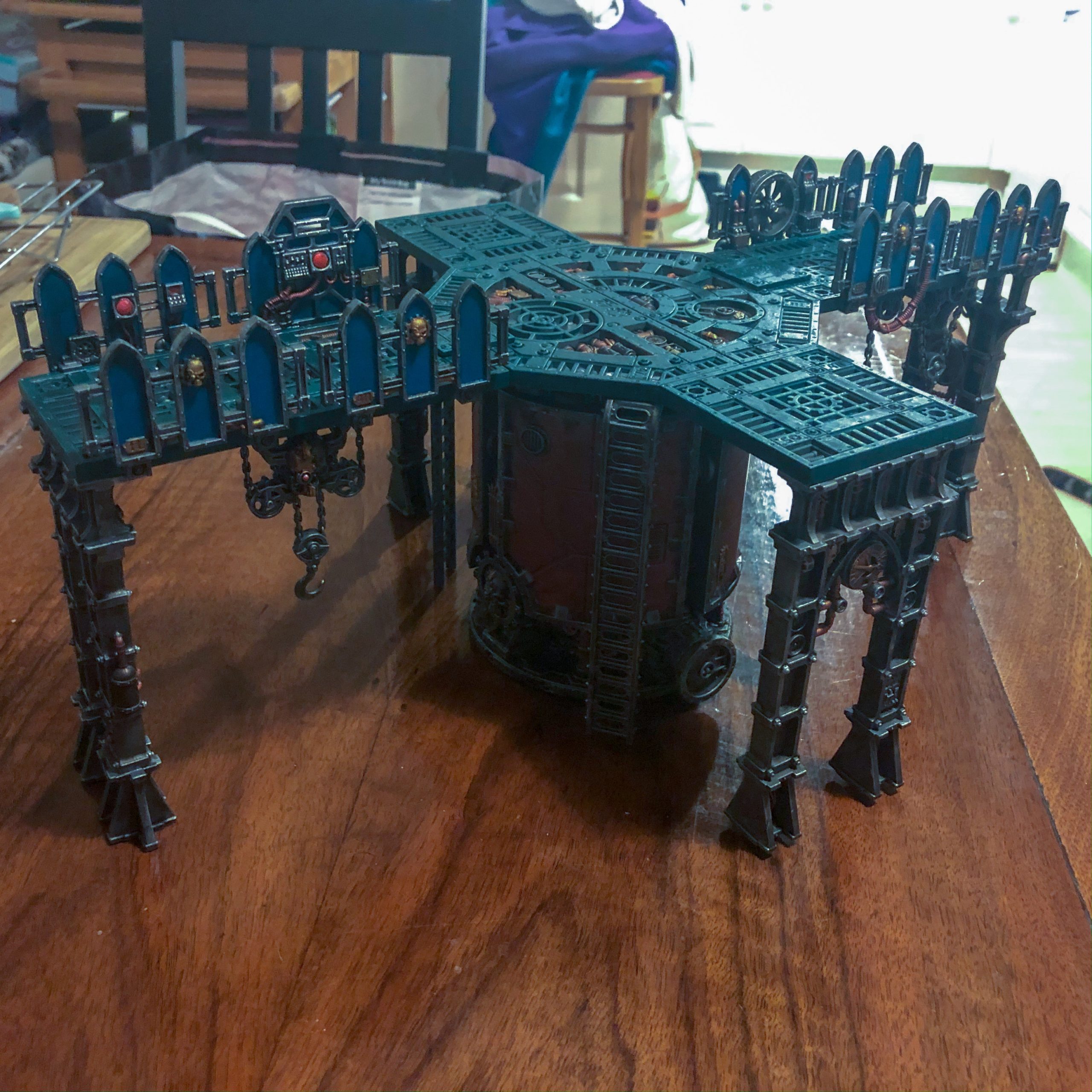 This board is built around the core of the two Sector Mechancum Killzones for Kill Team, one that came with the second starter set and one that came separately.

So let’s take a look what’s in the box.

The first items are two sets of Alcomite Stacks.

I got the Fangs of Ulfich as the first item bought for Kill Team, and I just went ahead and built the Alcomite Stack as it said in the instructions, although it did take me along time to paint them.

They are painted by spraying with Leadbelcher, washed with Nuln Oil followed by Agrax Earthshade and drybrushed with Necron Compound which is how I do all of my dirty industrial metal.

The flat panels were done by leaving the Leadbelcher base untouched and painting it with Gryph-Houn Orange, which gives a nice coppery tone, of course this is them protected with Stormshield varnish.

The second set of Alcomite Stacks came in the original Killzone Sector Mechanicus set, and I was able to realise I need to keep its parts separate to allow it to be set up to make the different layouts needed for that Killzones missions.

Next up is a set of Galvanic Servohaulers, these came with the Krogskull’s Boyz, done in a Thousand Sons blue colour, because Megan thought it would look good, and you know what they do.

This set adds a lot of flavour to the table and really does make it look as if there is a working environment.

I first encountered this set when I was at the 30k Channel to record a game a few years ago and I shortly afterwards ordered two sets for Company of Legends terrain, I was that impressed by them.

Then there is a set of Thermic Plasma Conduits, which are always a fun part of any board, they create a nice bit of terrain that forces vehicles to go around and can give cover to infantry for very little footprint.

These were done using the industrial metal scheme with green plasma, green is my favourite colour and I think it looks good on these.

I did the broken coils in Retributor Armour washed with Agrax Earthshade because my headcannon is that plasma coils are made of gold!

The Ferratonic Incinerator came with the Killzone Sector Mechanicus box and is a really nice big piece of scenery that looks really good on the table, the big centre silo does a good job at blocking line of sight.

I did the walkways in Lupercal Green, washed with Nuln Oil and drybrushed with Sons of Horus Green, and the barriers are painted with Thousand Sons Blue to tie them in with the Galvanic Servohaulers.

This is the first thing not from anything to do with Kill Team, it’s a pair of Haemotrope Reactors, which I got from Warhammer 40,000 Conquest, a fantastic Partworks magazine which finished in March after 80 weeks.

I bought these from Forbidden Planet which cost me £7.99 each so I saved nearly £12 buying the pair compared to buying the pack from Games Workshop.

I added these to bulk out the what I originally had for the Killzone Sector Mechanicus, which was originally going to be combined with another Killzone to make a full table of scenery.

I also at the same time, again from Conquest got a pair of Thermic Plasma Regulators.

The hope is that along with the Haemotrope Reactors, I get a few pieces of good line of sight blocking terrain and a few things that can really help bulk out a table, and they fit the theme so brilliantly, especially the way the inter grate so well with the Thermic Plasma Conduits.

Then as I was finished with this, Game Workshop announced the second Kill Team Starter Set, I collect T’au and I collect Primaris Marines in 40k so the added scenery made this an auto buy for me.

That meant I had a few things to add to this table, not a huge amount of stuff, but a few little things, the first being a Ferratonic Furnace.

I do like this piece of scenery, nice and big piece to sit and block line of sight, and an elevated potion for ranged squads to sit on.

There were also a couple of lone platforms which on their own don’t add too much to the table, but can be added to the Ferratonic Insinetetor or Ferratonic Furnace to add some extra walkway to them.

They are a little meh though if I am honest, but they are part of the Killzone.

And finally I have more Alcomite Stacks, one and a half sets to be precise.

They do add a couple of small bits that help block line of sight along with a couple of bits which are more or less just scatter terrain.

So that’s the table based around the two Killzone Sector Mechanicus sets.

The biggest issues is that whilst there are a few pieces, it lacks in Line of a Sight blockers, so how would I fix that.

My first thought is a set of STC Ryza-Pattern Ruins to be painted up in a Mechanicum theme, or in colours to match this set, and perhaps a set or two of Munitorium Armoured Containers.

Once those are added, I think we will have a nice and reasonably balanced table of scenery.