“Aye Lad I was there the day the ever night of the under hive became blinding light and the shadows cowered at what was to come. We first thought it was a blessing from the heavens how little did we know…… the things we saw I now know +++Redacted+++ are real!”

The date is 009.M31 and the civil war has come to Kayvas Belt, removed from the conflict due to it minor importance to the war effort of either side. The sector has now become one of the major crossing points in the war for Loyalist forces to rally in the solar system. All because of a strange anomaly creating a channel through a massive warp rift what is now known as the ruinstorm.

The sector only recently released from the grip of an Ork empire by the IXth and XXth Legions who left the area on strained relations and established minor settlements in the sector for the mining of local resources. The only planet of note was a minorus manufactorum world which held out from the Ork empire by being cloaked in a phenomenon known as Gellman’s Grace.

The Phenomenon meant that planet reflects the light of the systems dwarf star and blends in with local asteroid belts meaning it is almost impossible to detect with visual eye and interferences from reflected radiation also affect most sensory equipment. when the sector was cleared and the xenos threat removed to the surprise of the Imperium envoys from this hidden planet appeared on local planets looking for answers on this great human empire that banished a menace that had plagued them for generations.

The planet quickly fell in line with the greater Imperium and Mechanicum found that the factories on this heavily industrialized planet acceptable for most basic STC equipment used by the increasing demands of the new Imperial armies. 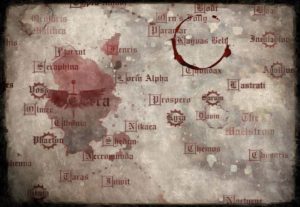 Until 939.m31 when rumours word of civil war broke out and the Emperors favoured son the Warmaster Horus turning his back on the Emperor and plunging the Imperium into chaos. The planet stayed in loyalist hands from the start of the war, with the IXth legion maintaining a minor presence on the planet since the its compliance ensuring a steady flow of materials was delivered to the legion and also investigating rumours of power armoured giants sabotaging factories and raiding shipping lanes.

Due to its prior constant state of peril from the Ork empire the planet had a vast a space defence array both orbital and ground based to ensure no ship got word out of the hidden planet. this was used to great effect to keep the planet out of the wider war and a staging post for shattered elements of the loyalist forces to gather.

When the ruinstorm hit the galaxy, refugees began to overwhelm the system and investigation by the local Magos found that this appeared to be one of the few sectors unaffected with clear communications with terra and most of the Segmentum Solar.

Soon the flow of refugees became a common sight and Imperial agents set up checkpoints in the system as vetting area for clearance to Segmentum Solar.

It with one of these frequent ships translating in system that the civil war truly hit Kayvas Minor. 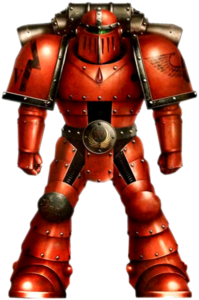 A relic from a era long forgotten translated in system, one of the last know Goliath capital class bulk freighter Terras Enlightenment limped into the system.

Venting from multiple locations on the vessel it moved towards the systems defence ships even dwarfing the capital ships of the loyalist fleet. Hails to the hulking ship where met with silence.

Normally in a situation like this, the ship would be  boarded or unceremoniously destroyed but the Magos in charge of network defences argued that to open fire on such a relic was blasphemy of the highest order. It wasn’t until the intervention of Captain Angelous of the IX legion, who stormed into the command centre after returning with hast from a perimeter defence inspection and forced the Magos at gun point to open fire on the ship that action was taken.

But it was too late and the behemoth rammed into battleship Sigillites Pride before it could brings guns to bare and wedged the wounded vessel between it and the planetary guns.

Macro shells, plasma torpedoes and any ordnance from the planet that could be pointed skyward it seemed opened fire as the two ships tumbled to their deaths. It was said even in the dark of the underhives the light of wrath of Kayvas Minor could be seen. 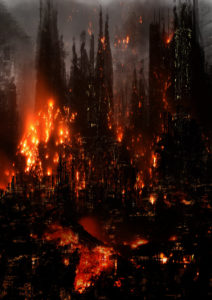 But as the stricken battleship’s shields failed and broke apart the near intact bulk freighter began it’s apocalyptic impact into the planet flattening Hive Invictum as if it was bastion of sand against the tide of the ocean and also destroying a vast network of planetary defence grid designed to take orbital bombardment not a hive city sized missile crashing into them and created a rented scar across the planet.

It was then the vast array of the Warmasters army followed close behind who knew of the location of the planet from beacons placed by unknown elements and a great siege line in space around the planet was created just out of range of the planetary defences. An immense battle in space raged for the next 13 nights while the traitors used the large gap in defences to land troops in at the beginning of the rented trench created by the suicide ship.

Loyalist forces now rush to contain the site and destroy the beachhead while Imperial agents understand what the traitor’s end play is with the planet.